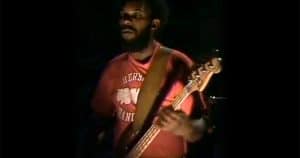 Finger funk grooves became popular in the 70’s and have continued to be a major source of inspiration for pop, rock, smooth jazz and fusion music.  The rhythmical feel suggested by the bass lines has a distinct sound where the 16 note is the main rhythmical subdivision against the pulse.  Playing finger funk grooves requires a strong punchy right hand attack where the rhythmical phrases are played with a more staccato phrasing.

One of the cornerstones of finger funk grooves is syncopation, where the accents of the rhythmical subdivision are placed where they are not expected.  One of the easiest ways to create syncopation on a funk groove is by playing steady 16th notes where some of the notes are accented as audible pitches and others are played as dead notes (muted pitches), mixed with ghost notes, which are dampened slightly with the left hand.  This provides you with a widespread of dynamic phrasing which is one of the main components for a successful funk groove.  If all the notes you play are at the same dynamic level, then the groove will sound choppy and the feel and phrasing will be compromised.

Notice in example 1 that I’ve blended both the dead notes and ghost notes together, while in example 2, I’m predominately using ghost notes to create a funky dynamic.  I suggest that you play these lines slowly in the beginning and follow the Crawl-Walk-Run methodology that I describe in my book, How to Practice with Maximum Efficiency.  The examples are played at 110 BPM, so to get these lines where they are accurate and played with precision, make sure to follow the steps of crawl, walk and run!

To Find Out More About the Crawl-Walk-Run Method Click Here!