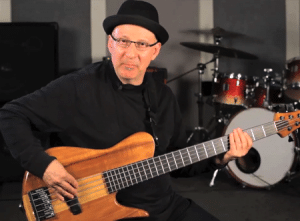 Lincoln Goines is one of the foremost experts on Brazilian bass grooves.

Geographically, Brazilian bass grooves come from the South American country of Brazil.  Like jazz, the rhythms of Brazilian musical styles are heavily influenced by African rhythms.

Brazilian music is vast in its complexity and history.  To understand this music in an authentic manner can take years to master, so this lesson only serves an introductory launching pad and to enable you to understand the ‘essence’ of these grooves as applied to jazz and popular music.

Abraham Laboriel explained to me that the feel in Brazilian music is best understood by thinking of the difference between the shape of an egg and a perfectly round ball.  If you roll the ball down a straight board, it will roll evenly.  However, if you roll and egg down the same board – because of its oval shape – you will get an uneven roll.  This uneven roll or lilt mirrors the rhythmical feel of Brazilian music.    The overall feel of Brazilian music is not machine like, but full of different dynamic levels, nuance and character.

The different grooves that we will take a look at have specific names that you should remember, just like you would have to learn and understand specific names for harmonic and melodic concepts in jazz.  The grooves that I’m going to cover are what I call the BIG 5 Brazilian Bass Grooves:

The Samba groove is made up of a repetitive rhythm pattern of dotted 8th note followed by a 16th note and most commonly moving from the root and 5th of the chord.  There should be a slight accent on beats two and four.

The Bossa Nova is like a Samba played in half time.  The difference is that a Samba is written in 16th notes and the accents are on beats 2 and 4.  Whereas the Bossa Nova groove is written in 8th notes- the first beat is played with a shorter dynamic, while the third beat is accented stronger and played slightly longer.

The Baiao (pronounced By-on), is another prolific Latin style from Brazil.  The Baiao uses a repetitive rhythmic figure consisting of a dotted 8th note to a 16th similar to that in the Samba.  The Baiao provides more rhythmical space because the dotted 8th followed by a16th note only falls on beats 1 and 3- this creates a more syncopated feel and pushes the time forward more than a Samba.  It’s important to be able to hear the 16th note anticipation into beats 2 and 4 and play that with precision.

The Partito Alto rhythm is a variation of the samba.  It is felt in 16ths and is usually played a little slower than a standard Samba rhythm.  The standard Partito Alto groove is very syncopated and characterised by the strong accents on the 8ths notes in beat 2 of each bar.  Partito Alto grooves blend very well with popular contemporary musical styles.

The Partito Alto rhythm can also be displaced where the 8th note accents appear on beat one of each bar.  This is known as a Reverse Partito Alto groove.  This groove fits into a modern approach to playing Brazilian grooves and can be used in a cross-over context in popular music and other styles such as funk and fusion.