In order to develop the understanding of the evolutionary process of jazz, you need to understand the music that has come before.  Many young players are deluded by trying to develop what they deem as their ‘own style’ without first spending many years studying the great bass players from the past and thus, learning to pay their dues.  Learning how to play the bass is an evolutionary process that you must be aware of in order to improve your skills. 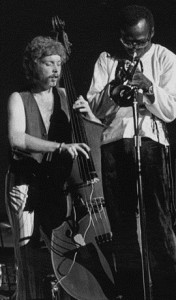 The following list will give you an insight on a number of important jazz bass players and certain eras of jazz as they were developing.  Your development continually hinges on three critical components: what you practice, who you play with and what you listen to.  It is important to find recordings of these bass players to listen to and study on a daily basis.

Since the late 70’s & early 80’s no single musical style or trend has emerged.  Instead, there has been an evolution of previous styles, amalgamations and new genres created from old ones.  One of the biggest developments since the early 90’s has been the emergence of computer driven music creating a further sophistication of electric jazz and its related styles.  It’s time to become aware of the forefathers of jazz bass and begin your own personal journey of self-discovery through the masters who have paved the way for your further musical evolution!

Until next time…practice smart, work hard and play creatively!