In this video I performed the Horace Silver tune Peace as a solo bass arrangement. The harmonic structure of this tune is interesting and contains some cool chord substitutions. This lesson is going to break down the harmonic content for analysis purposes.

Peace by Horace Silver is comprised of a ten bar form phrased in two groups of 4-bars and one group of 2-bars. In order to understand the harmonic structure of any tune, we need to analyse the chord changes and discover how the progression relates to the overall key areas using diatonic and non-diatonic harmony consisting of modal interchange, tri-tone substitution, secondary dominants and extended dominant chords. 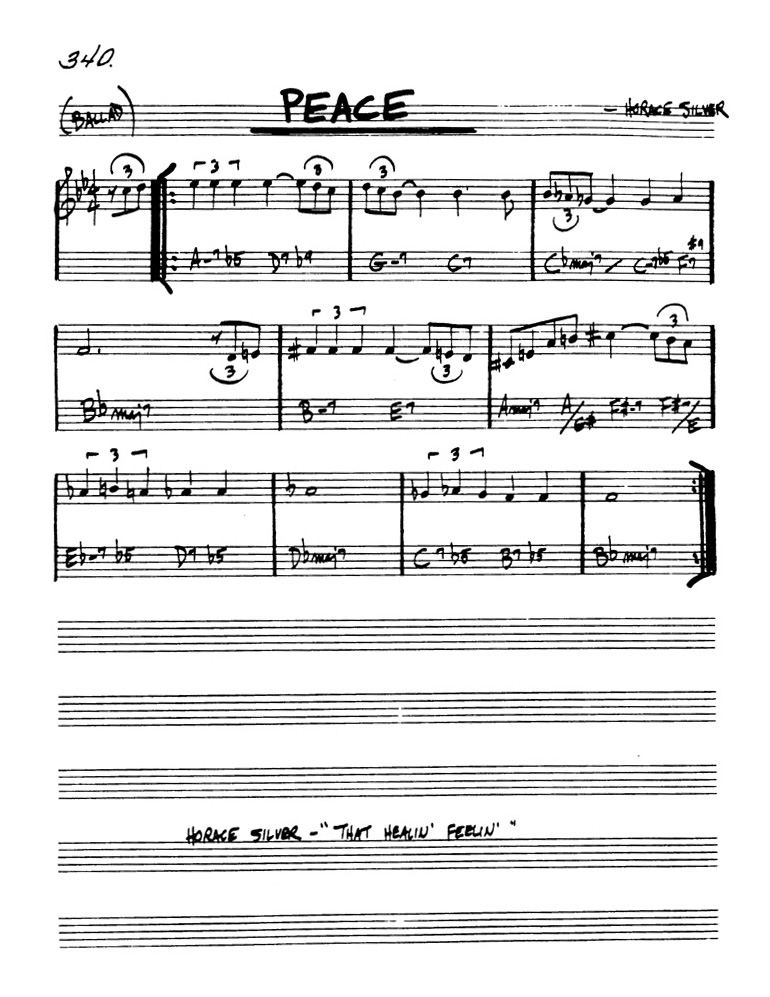 This tune is in the key of Bb and the first step is to understand the common thread of this harmonic progression that points us to Bb. In bar one, the A-7(b5) is the related II chord to the D7(b9) that follows, which is a secondary dominant (SD) resolving to G-7 functioning as a VI-7 in Bbmaj; this works as a pivot chord functioning as a related II-7 followed by C7 which is a tri-tone Substitute (TTS) pointing to Cbmaj7  functioning as the modal interchange chord bIImaj7. bIImaj7 works as a reharmonisation chord for II-7(b5) where the only difference between the two chords is the root note; this is then followed by a minor II V progression in Bbminor that resolves in the next bar to Bbmaj7.

The next four bars starts with a Imaj7 chord in Bbmajor followed by a direct modulation into the key of Amajor consisting of II-7, V7, Imaj7, VI-7. The last four bar section continues with a deceptive II V I pattern in Bbmin resolving to bIIImaj7 which functions as a diatonic substitution chord for Bb-7 (I-7). It’s important to understand at this point that the foundation of modal interchange flip flops between the parallel major and minor key areas- in this case between Bbmajor and Bbminor. The last two bars resolves back to Bbmajor with C7(b5) working as an extended dominant chord followed by B7(b5) which is a tri-tone substitute for F7 and finally resolving to Imaj7 in Bbmajor.

This is a great way to start the application process. Remember that practicing and learning tunes are the vehicle for all of your theoretical applications.